Mary, in every nativity scene, wears a hijab. Well, maybe it is technically a “veil”. Women have had to wear head-covering in churches until 1981, sometimes just black lace. I remember school day tours of cathedrals, when we were required to put even just a “Kleenex” on our heads to show appropriate respect.

Recently a friend was purchasing Christmas ornaments for a tree for the Domestic Violence Response Team. Different colours were packed together. She decided to get purple and silver, “their colours”. A couple were standing there in front of the tall stack of decorations. The woman, who was wearing a hijab, asked my friend (in perfect English) why she had chosen those colours. That woman went on to explain that this was their first Christmas in Canada. A Christian couple had given them a tree and they wanted to decorate it, without offending those friends. They wondered what colours they should select. My friend said that they should choose the colours they liked best – that this is what Christmas is all about. The woman smiled, reached up and took a package of turquoise and silver balls.

This is a true story. Josie just told it at our Century House Association chairpersons’ meeting. I gave her a standing ovation and a hug afterwards. I think it would be good for our whole country if this story could be shared from coast to coast to coast. (Some new immigrants are going “north”, yes?)

A funny but sort of sad comment to finish is, in my rush to share a moving story, I misspelled “hijab”. This proves that I probably hadn’t even said it aloud. (I often say, about most words – if you can say it, you can spell it.) I need to pay attention and practice Arab words.

December 1st is my day to mount my first solo art show at the New Westminster library, main branch, in the upstairs gallery. 6th Avenue, between 6th & 8th Streets. (Not that I expect that I will ever have another art show…) Hope you can “show up”. They liked my “Santa Series”! The selection committee […]

via “Show-up at the NWPL Corral”… — Franci Louann

December 1st is my day to mount my first solo art show at the New Westminster library, main branch, in the upstairs gallery. 6th Avenue, between 6th & 8th Streets. (Not that I expect that I will ever have another art show…) Hope you can “show up”.

They liked my “Santa Series”! The selection committee knew of my poetry and invited that as well. I just happen to have ekphrastic poetry, inspired by my own artwork.

In addition to the Mr & Mrs Santa portraits, I’ll have my “Two Dimensions”, inspired by the “Wait for Me, Daddy” photo. That, my first framed piece, was accepted for the inaugural Community Gallery show at the Anvil Centre opening in 2014. (The original has sold.) I’ll also present some framed originals from my “Mia Series” and some portraits of friends and family.

“Mia” – that may have been the name of our model in my only life drawing experience. I didn’t know that the initial two-minute poses were for “warm-up”, so I was done in two minutes. I am your occasional visual artist, preferring felt pen on cream card stock. On some few occasions, the muse has visited. (I wonder if she will ever visit again.)

My “Blue Santa”, BTW, has astonished me so far. Was informed that our city would like to purchase use of the image for their holiday card for the Parks & Recreation Department. The cheque is in the mail? You may see him & his friends in my gallery here at my blog. Thanks for visiting (& thank you to Mrs Claus who invited me to do their portrait).

Earlier this year I “confessed” at Beacon Unitarian that I had “submission-phobia”. People were astonished. Thanks to a little support from some Beacon members, I have been making more artistic submissions.

My poem on a Shakespeare theme, “Life as a Mortal Coil”, won second prize in the Burnaby Writers’ Society contest.

My  contour drawing, “Mr & Mrs Santa #3” (in blue), was chosen by the City of New Westminster for its holiday card for Parks and Recreation use.

The “Santa Series” (six drawings) will be part of my first (& probably last) solo show at the NW library this December. Christmas art cards are $2 or 10 for $15. You may see these at Century House Artists’ Fair on December 3rd. The drawings are here in my Gallery.

I did say that I would finish the story about that horse in the photo in my last post. This giant Percheron (I’m 99% sure of the breed) is  one of many that I have admired at the stables near Burnaby Lake. It was a rescue horse, not wanted because it was “the wrong colour”. The new owner had to get a custom-made saddle and bridle for her steed. She can be seen riding around the lake with a friend on a much smaller equine companion. I love this story. I think this is one of the biggest horses I have ever seen.

There are incredibly beautiful horses… 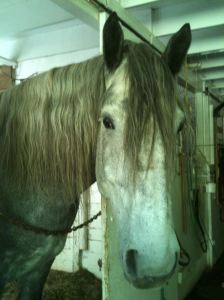 Thank you to pals, Joe Dynahan Thompson and Michael Scales, for the photos used for my “ABOUT” page banner here. Thanks also to Laura Redmond, of RetroMetro Designs Inc., http://www.retrometrodesign.ca, who is helping me build this site…

Joe and I met on his birthday…I was happy to be able to provide this portrait…we and our mutual friend, S.E.N.M., had a lot of laughs that day in the Whole Foods cafe.

Michael and I are shown at the spring fund-raiser for Beacon Unitarian’s Syrian family, who arrived this summer. That’s where I purchased Laura’s excellent service in creating this website (blog-site?). We had so much fun at our table (with art) that we missed a whole round of the Trivia Contest!

My GALLERY banner has my most popular drawing…”Two Dimensions”.

In 2010 we spent 10 days in Berlin before going on to visit Jose’s family in Portugal. I’d been in Germany in early 1975. We both wanted to see Berlin, which I had missed then.

This poem won an Honourable Mention in the Royal City Literary Arts Society (a mouthful? i.e. RCLAS) contest earlier this year. It has just been published in the October issue of the RCLAS Ezine. So, here you are. I’ve been told that it refers to the Huguenots.

Now I see double-spacing here. Unless that will change back to single, we may miss the impact of the condensed stanzas having the shapes of the many memorial blocks.

I learned many years ago from a German friend, if you can’t type an umlaut, you add an “e” after the vowel. I love to say “Gewuertztraminer”. We have been making a fine one at the Wine Factory on Front St in New Westminster. “Cheeky Monkey” brand had great labels for this product, but they stopped making/providing those.

And now, my most recent recognition-winning poem…not true – most recent “otherwise-published”. My last award BTW was from the Burnaby Writers’ Society – second prize for my poem “The Mortal Coil of Life” – yes, the theme was “Shakespeare” – it’s 400 years, you know.

I’ll be reading that poem at the BWS Awards presentation ceremony at the Deer Lake Gallery, 6584 Deer Lake Ave (to left of Shadbolt Centre) – 7:30-9:30 on Tuesday, October 18. CRISTY WATSON won first prize – she read her poem at Poetic Justice this fall & honoured Shakespeare so well – I “had a feeling” – was not surprised by her win.

I’ve not come to celebrate     war

I’m a pacifist, on a Berlin bus

he said: I did not speak up, and when they came for me

there was no one left to speak

I’ll look for memorials for the others—

the tour guide reports—at one time

when Protestants were persecuted in France

they were safe in Berlin—

every fifth Berliner was French…

the painting in our hotel room shows a ship

all the spires, old and new, are included—

it’s a clear day, an even keel, calm water

but my early morning stanzas come

as coffins, long dark shapes in the night…

published in the RCLAS Ezine, Wordplay at Work, October 2016

This morning I woke up with “North by Northwest”. As I turned on the radio at about 7:30 (?) I heard a fine interview about ginkgo trees…thought I must have that word in a poem… I was thinking of a romantic story about a high school friend, but that one hasn’t appeared in a poem (yet).

After learning the correct spelling of “ginkgo”, I found I have that word in two versions of what I call a “dual list poem” – after a poem by Elee Kraljii Gardiner. (I’ve also confirmed how to spell her name. She with the beautiful new book of poems, “Serpentine Loop” – about skating.)

My poem lists terms from both dental hygiene and poetry…my life’s major works. I’d forgotten the term, “ginkgo walk” – but there it was…

Oh good, the italics (for poetry terms) survive here, and the line breaks… Where I posted it on North by Northwest’s Facebook page, it cam through in just a (funny?) paragraph form.

What about George Elliott Clarke? I’d better get back to my presentation about him, for delivery at the New Westminster main library this Tuesday at 6:30. “In Their Words” is  organized by Alan Girling, and includes four genres. I wrote an essay about him for Introduction to Poetry at Douglas College in 2011. I presented this also at World Poetry at the library in Black History Month (2014?). Since 2011 Mr Clarke has been Poet Laureate of Toronto, and he is now Canada’s seventh Parliamentary Poet Laureate. He has also earned his eighth honourary doctorate. I’m happy to see the smile on his face (in photographs) these days.

BTW (by the way) the last post before this one has my poem which was written on September 17, 2001 – fifteen years ago yesterday – poem three in my “9/11 Trilogy”. “One Week After”. The first poem was written “Ten Years Before” – the title then was “A Valentine for the Western World”. It appears on the previous post, on the same day. It was also the first thing I heard on the radio one morning. My feelings had to be expressed in a poem. For me, it explained 911. Poem Two has not  been published, so I won’t share it here.

G is also for “Good Morning”. Good Morning, Afternoon, or Evening – as the case may be.

you note the gold coin at my throat

I finger it and say, the person’s head

is the Statue of Liberty

it must be, it’s American

very appropriate for these times

you answer; I continue

the head is the back of the coin, I like it better

the front has eagles on it

maybe they represent something evil…

embarrassed for my possible faux pas

how can eagles be evil?

(is it politically incorrect to speak of politics

how are you really? we ask, knowing

the answers would be different otherwise…

here at the Sunshine Diner, almost one week after—

this is the right place for my memorial—

the poems that would not come, could not;

my hand over paper

the eerie, surreal effects of the diner’s neon lights

I awake to hear the news

of one hundred     blackened bodies     in Baghdad

all the women of a neighbourhood

in a bomb shelter     with their children

by our allied forces

one man has lost     eleven

this is February 13th

on the Christian calendar

most of our leaders are     Christian?

one man has lost     eleven

On February 14, 2001 Agence France Presse published Iraq Wants U.S. Tried for War Crimes, stating: a total of 407 people were killed, including 269 women in the Amriya shelter in Baghdad, on February 13, 1991. This shelter, one of thirty-four in Baghdad, has been kept untouched as a memorial.